Service Disconnects: How Many and Where to Put Them. What’s New For 2020? 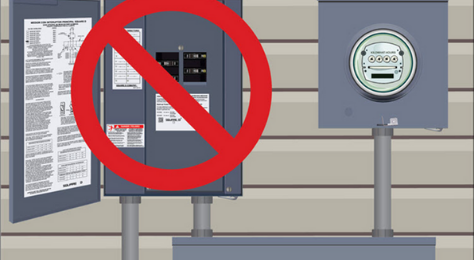 NEC Section 230.71. Six Switches or Circuit Breakers in One Enclosure

Since the 1937 edition of the NEC, the service disconnecting means used to isolate a building’s premises wiring from the utility provider’s conductors has been allowed to consist of as few as one, but as many as six switches or sets of circuit breakers.

The long-standing permission from the NEC to install up to six switches or circuit breakers or a combination thereof as the service disconnect for an electrical service remained uncontested through the 2017 Code cycle as long as:

The message the NEC was sending was clear, the electrician could install six switches or circuit breakers to control the electrical service, but those control devices had to stay together in one location.

NEC Section 230.71 has undergone a significant overhaul for the 2020 Code cycle, namely, the omission of the previous permission to install six switches or sets of circuit breakers acting as service disconnect, in a single enclosure.

You are still allowed four, five, or even six switches or circuit breakers to act as the one service disconnect, but those control devices must now be installed within individual enclosures.

In the 2017 Code cycle, Section 230.71(A) allowed up to six switches or sets of circuit breakers to serve as the service disconnect as long as all control devices were installed within a single electrical enclosure or in separate enclosures, while the enclosures remained grouped.

In the 2020 Code cycle, Section 230.71(B) also allows up to six switches or sets of circuit breakers to serve as the main disconnect for one service, if they consist of a combination of any of the following:

Section 230.72(A) then goes on to tell the electrician to group all of these individual enclosures acting as one service disconnect, and to mark each to indicate the load being served.

What 230.71 in the 2020 NEC fails to do is give the electrician the same permission enjoyed since 1937 to install these six switches or sets of circuit breakers in one single electrical enclosure.

Gone are the days of installing four, five, or even six two-pole circuit breakers in a single outdoor enclosure to control loads such as the dwelling’s load center, the garage panel, the AC condensing unit, the electric furnace, the pool pump, the hot tub on the deck, and so on.

Switches and Sets of Circuit Breakers

Unless you sleep with a Codebook under your pillow, you may have found yourself stopping for an unceremonious double-take at the NEC reference to “six sets of circuit breakers.”

What the NEC is referring to is a group of individual circuit breakers, perhaps two or even three, assembled to make one two-pole or three-pole overcurrent device.

Remember, the Code allows up to six throws of the hand to terminate power at an electrical service. This may include flipping a single-pole, two-pole, or even three-pole circuit breaker to complete the job.

The NEC in 2020 has erased our antiquated method of installing six circuit breakers in one enclosure to serve as a building’s service disconnect. The reason? Bundling multiple service disconnect switches inside one enclosure makes it impossible to comply with NFPA 70E Standards for Electrical Safety in the Workplace when it comes to safe work practices applied to service equipment.

While it may not seem convenient at present, this new revision to the Code allows electricians to flip a switch and terminate all power inside an enclosure for equipment servicing, making a safer work environment for all involved.

Brush up on the 2020 NEC and other industry essentials when you complete electrical continuing education. Courses are available for a significant number of states and can be completed entirely online. Connect with JADE Learning today to stay up to date on the latest technical, code-related news and topics.

5 thoughts on “Service Disconnects: How Many and Where to Put Them. What’s New For 2020?”

Because temporary electrical installations present a special set of hazards, they have their own Article in the NEC code. Read mor[…]

A common application of multiwire branch circuits as described in section 210.4 is for a 120/240-volt, single-phase system where t[…]