Splicing NM Cable in Walls and Other Concealed Spaces 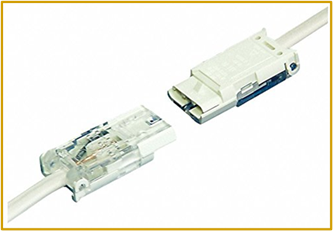 If you are an electrical contractor that has ever wired a room addition, you will likely be familiar with this process.

Before ever attempting to provide an estimate, you must first determine how to get power from the home’s existing breaker panel to the new lighting and receptacle outlets in the addition. Bidding the individual outlets for the new addition is relatively easy, but bidding power to feed them can take some investigation and imagination.

If the contractor finds the electrical load center is on the opposite end of the home apart from the new addition, they can assume they are in for some work to get at least one new branch circuit to the affected area. In that case, the electrician can find great satisfaction in discovering a 15- or 20-amp branch circuit with little or no load imposed upon it, near the site of the new construction. Often an unloaded branch circuit discovered in this area is a dedicated circuit feeding the rear porch receptacle – the same rear porch being torn off the house for the sake of the room addition.  If an existing 15- or 20-amp branch circuit is available where the new addition is about to abut the home, the contractor can appoint this existing branch circuit as the new feed for the room addition’s lights and receptacles. This provides the electrician with a ready-made NM cable whip conveniently positioned for feeding the first receptacle in the new room addition.

This can be an ideal setup that allows the electrical contractor to get the job done quickly while making a fair profit.

In an Ideal World

So far, we have described the perfect conditions for wiring a room addition in a snap. This scenario is even more rewarding when the job pays the contractor the same, regardless of where the contractor finds power for the room.

But what about when this seemingly perfect ready-to-use NM cable whip is too short to reach the proposed location of the first outlet in the new room addition? Sometimes, this kind of existing NM cable whip is left protruding from the exposed edge of an otherwise finished and painted wall, and there is no means for following the cable back to its origin to attach a longer cable. When this is the case we are faced with the arduous task of explaining to the homeowner why we are going to have to install an unplanned receptacle or smoke detector, or even extra lighting fixture in an unconventional -or at least unplanned- location within the new addition. The additional outlet is necessary to serve as the required junction box for tying on a longer piece of NM cable to reach the first electrical outlet in the new room addition.

The homeowner may be dissatisfied with the news of this surprise outlet since it can spoil the aesthetics of the room, and it can sometimes increase the cost of the project, depending on the type of outlet being proposed. An extra receptacle outlet is much cheaper than adding an additional lighting fixture or smoke detector, but none of it is free.

Is there a solution? It depends on the NEC Code cycle that you are working in.

There is a product available that at first glance appears to be the cure-all for so many NM cable woes, such as when a NM cable is too short to reach its destination. It is called a NM Cable 2 & 3 Wire Splice kit.

This splice and tap kit is designed for NM cables such as Romex brand NM cable and provides a fast and reliable means for splicing or tapping 2-wire and 3 wire NM cables w/ground – up to 300 volts. The manufacturers of these kits generally claim the product will work with NM cables manufactured after 1990.

Manufacturers also claim these little miracle workers are designed and approved for use in rework projects within existing structures, referring to NEC 334.40(B) as their source.

If we turn to 334.40(B) in our 2005, 2008, and 2011 NEC Codebooks, we find the following text: Switch, outlet, and tap devices of insulating materials shall be permitted to be used without boxes in exposed cable wiring and for rewiring in existing buildings where the cable is concealed and fished.

Which means an insulated tap device (splicing device) can be used in these earlier Code cycles without being installed in a junction box if the tap device is:

The 2005, 2008, and 2011 editions of the Code give permission for installing a splicing device inside a wall space (concealed) without a junction box if you are rewiring a house and need to extend a wire. The only condition is the splice has to be fished, meaning you cannot legally use this splicing device where there is no drywall yet installed because the NEC expects you in this case to use a proper junction/outlet box, so the splice can later be accessed. The language found in these earlier Code cycles gives the electrician permission to make a splice and drop the splicing device behind the finished wall, while meeting all of the technical points of the Code in doing so.

NM Cable Splice Kits – Part II  [2014 Code cycle]However, with the release of the 2014 NEC, we find that the Code Making Panel has reconsidered their earlier position on concealing splicing devices in wall spaces so that 334.40(B) in the 2014 NEC reads as follows: Self-contained switches, self-contained receptacles, and nonmetallic sheathed cable interconnector devices of insulating material that are listed shall be permitted to be used without boxes in exposed cable wiring and for REPAIR wiring in existing buildings where the cable is concealed.

The 2014 Code cycle adopted a more precise language when discussing these splicing devices – declaring they must be listed (such as UL) and deemed a nonmetallic sheathed cable interconnector device. So that no confusion could be had as to the type of splicing mechanism being referred to for this purpose. Section 334.40(B) in the 2014 NEC also removed permission for using the device as part of “rewiring” as the previous Code cycle(s) had stated. Replacing that language with REPAIR wiring only. So that a NM cable accidentally punctured with a screw or nail or nicked while fishing a wall could still qualify for this splicing procedure. But no permission existed in the 2014 NEC for using the splicing device outside of repair work. Also, the requirement for the NM cable to be “fished” if it were to be spliced was also removed. That is because the only time you are now permitted to use the device is for repair work and not for extending wiring (rewiring work) when the wiring is too short.

There is a product currently available in the US that is advertised as listed and NEC compliant for splicing NM cables within concealed spaces – even during rewiring projects. This is only true in jurisdictions where the 2011 or earlier Code cycles remain the standard. And the splice can only be concealed when it is part of a NM cable fished behind a wall or floor. The device is never permitted in an open stud space where drywall will later cover it during the finishing phase of a remodel, regardless of the Code cycle.

PV Systems: Starting with the Modules

When wiring PV modules in series (to create a series string of modules), voltage is additive while current remains the same. Serie[…]

One of the biggest threats facing retailers are cyber security attacks. While not completely avoidable, security solutions are ava[…]