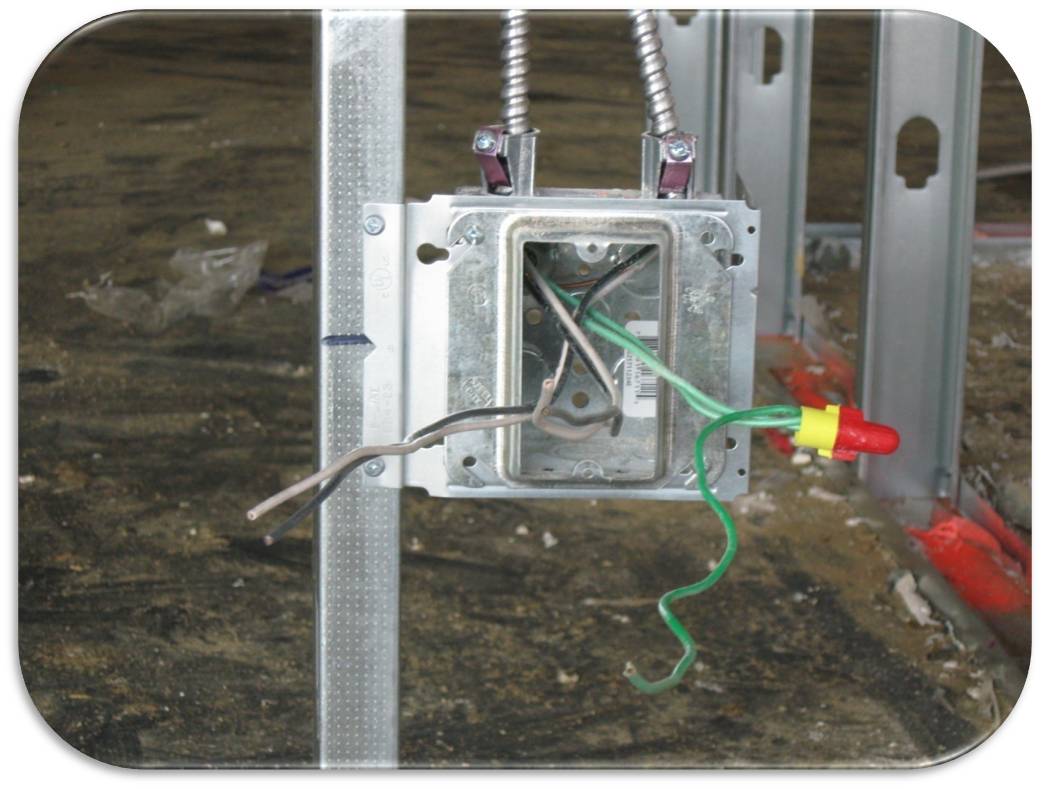 A question from our reader, regarding Grounding  VS  Bonding  Part 1

That is a good question! Let’s take a look at both of these grounding and bonding methods and see if we can find the answer.

Equipment Grounding Conductor (EGC) Attached To A Metal Box:  This is the process of taking a bare or green insulated conductor and attaching one end to a metal enclosure, junction or outlet box, while taking the other end to a point of connection on the grounded electrical system. When done properly, with a correctly sized equipment grounding conductor and correct fastener (bolt/screw), there is little that we could do to improve upon this system. When used as the sole means of grounding for a simple electrical system (metal boxes and metal pipe), the act of grounding is established at the point where the EGC connects to the metal box, and it is then transferred from that metal box, to the metal conduit system, via the connection made with a secure lock-ring.

Grounding-Bushing: This is a threaded-metal ring with a lug attached, that we screw down tightly onto the end of a threaded-metal conduit, threaded-metal conduit connector, or any other threaded-metal electrical component, such as a metal offset nipple (the kind we might use to connect a meter-base to an electrical panel.) This grounding-bushing has a lug bolted to it, to allow for the connection of an equipment grounding conductor (EGC) directly to the bushing. The act of grounding here is established at the point where the EGC connects to the bushing’s lug, it is then transferred to the metal conduit, and then to the metal box that it is attached to, via a secure lock-ring.

Now, on to the next relevant question: “Why would we ever need to use a grounding-bushing to ground/bond a piece of metal conduit, in the first place?”  The most common scenario is that which is covered by NEC section 250.92(B). This Code-section addresses the issue of continuity (or lack of it) between metal service-raceways (conduits), and metal service-equipment (such as a panel) when they are connected, one to another, utilizing a method that the NEC terms as an impaired connection. This “impaired connection” is the connection of a metal conduit to a metal box/enclosure by means of a concentric or eccentric factory knockout, located along the side or bottom of the metal box/enclosure.

These are multi-size factory knockouts located on the sides of an electrical box/enclosure, that consist of multiple pieces of loose and layered metal. These pieces of metal can be knocked out (or left in place) in increments, based on the size of conduit you wish to install. Once the correct amount of metal has been removed, based on the conduit size, the electrician is still often left with a hole that is grossly oversized (even though it is legal) and weak. That hole, due to its fragile construction, is susceptible to even more metal loss, and damage, if the inserted conduit is moved around after the connection is made using a secure lock-ring.

The NEC recognizes these fragile concentric and eccentric connections, and therefore requires, per 250.92(B), that an additional means of bonding be installed to supplement the design. This second required means of bonding must be an additional step, beyond that of the traditional method of bonding with an EGC taken directly to the metal box (Method #1.) This additional bonding is required because the poor connection established by these flimsy knockouts, is not considered a reliable conductor of electrons, during a short-to-ground condition. The Code states that the use of “grounding bushings” connected directly to the metal conduit (Method #2) is an approved method of achieving this required second means of bonding.

In applications that are not “service” raceways attached to “service” equipment, that are not subject to 250.92(B), we find that concentric and eccentric knockouts are generally approved for grounding and bonding. And that approval requires no additional means of grounding or bonding to be installed.

Which one is better?

To answer this, we must put away the idea of using one grounding method to supplement the other, as required in NEC section 250.92(B).  And instead, look at each method as a stand-alone means of grounding, while examining the benefits achieved by each, and under what circumstances.

Let’s assume we have a metal 4-square box with a metal conduit attached to it. The connection is made by means of a tightly installed lock-ring. (Note: This is NOT an impaired connection.)

Should we bring the EGC directly to the metal box, or add a grounding bushing to the conduit and attach the EGC to that bushing?

Answer this question: How often does an electrician happen upon a metal conduit where the lock-ring is loose at the point where the conduit meets the box? Do you think this loose lock-ring impairs the electrical connection (continuity) between the metal pipe and box? What if your EGC is attached to one, but not the other, and the lock-ring becomes loose over time? Will one of these components lose its ground?

If you could see ahead to the future, to this metal box and pipe that you are installing now, and you could see that the lock-ring will work itself loose, which component would you choose to ground, the box (Method #1)?  Or the conduit by means of the bushing (Method # 2)?

Remember, once the locknut has loosened, whichever one you did NOT choose, has just lost its ground.

If you chose grounding method #1, then you successfully grounded the metal box. And when the metal conduit is no longer tight due to the lock-ring, that box, which is full of energized conductors, as well as stripped and twisted joints, held together by nothing but wire nuts, remains grounded and protected against a short-to-ground. However, during this scenario the metal conduit, which is now loose, is not grounded. If there exists a nick in any of the wire insulation within that conduit, it could energize the metal conduit without ever tripping the circuit-breaker, causing a shock hazard to anyone coming into contact with it.

On the other hand…

If you chose grounding method #2, then you have successfully grounded the metal conduit, by way of the grounding-bushing, and this loose conduit remains grounded to the electrical system, even when it is no longer secured to the metal box. However, in this scenario, the metal box full of conductors and full of stripped joints held together by nothing but twist-on wire nuts, is no longer grounded. A nicked wire in this metal box or a loose wire nut that falls off and exposes bare twisted wires, could energize this box without ever tripping the circuit-breaker, causing a shock hazard to anyone that comes into contact with it.

So, again I reiterate your question, “Which is better?”

Is there a right answer? If there is, I do not feel that we have revealed it today.

However, I will share with you my personal opinion: I would ground the metal box, first and foremost.

Reason: If the conduit does become loose and continuity is broken between it and the metal box, I prefer the metal box remain grounded (if I can only choose one.) The conduit, unless ripped off the wall entirely, is a closed system that does not contain stripped wires, joints, nor an access point in which to make modifications to the wiring; it is less likely to be a part of a short-to ground-situation.

The metal box on the other hand, by design, is always subject to the next modification, and the subsequent damage caused to the conductors, by these modifications.

All things being equal, the box- being the location in which work is done, is much more apt to experience an electrical short-to ground-condition.

How Do I Renew My Florida Electrical License?

Licenses for Registered and Certified Electricians will expire on August 31st of every even numbered year. You will need to renew […]

Preventative maintenance (PM) is a service that offers early warning, brings peace of mind, and allows for revenue generation[…]

How To Get My Electrical License

In order to work as an electrician in most states, you will need to get your electrical license. Here’s how to become a licensed[…]