The Color of Green: Security in the Cannabis Industry 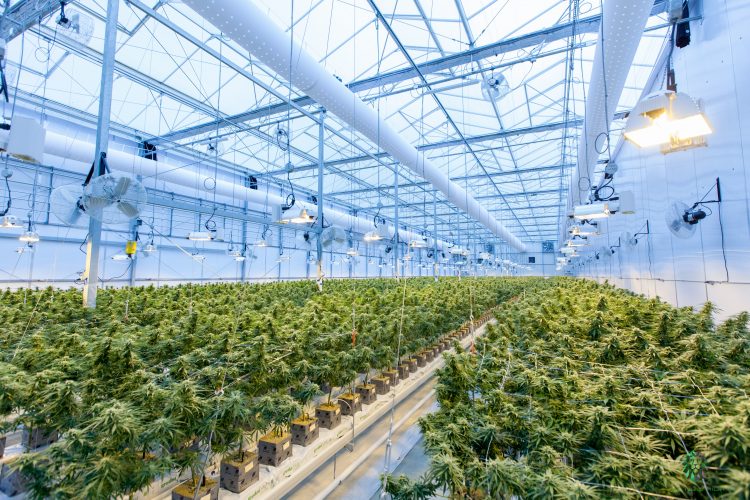 Cannabis creates a contrast of benevolent opposition; those that have tried it and those that have not. In addition, cannabis is deemed illegal by the federal government, but it is legal in individual states. Today, global sales are expected to reach $33.6 billion by 2025. With COVID-19, the use of medical marijuana has increased by upwards of 91%.

Each state can govern cannabis how it sees fit, which currently creates 50 states and one District worth of individual ideas on how cannabis should be treated, including security. With such growth, there are now security consultants and integrators who specialize in cannabis security, helping fledgling growers and distributors to navigate the rules set down by the state(s) in which they are going to operate. As of December 2021, eighteen states and the District of Columbia have fully legalized cannabis. More than 36 states have an operational marijuana industry and have published or established security requirements. This graphic, provided by Sapphire Risk; shows the current legal landscape of cannabis in the United States. 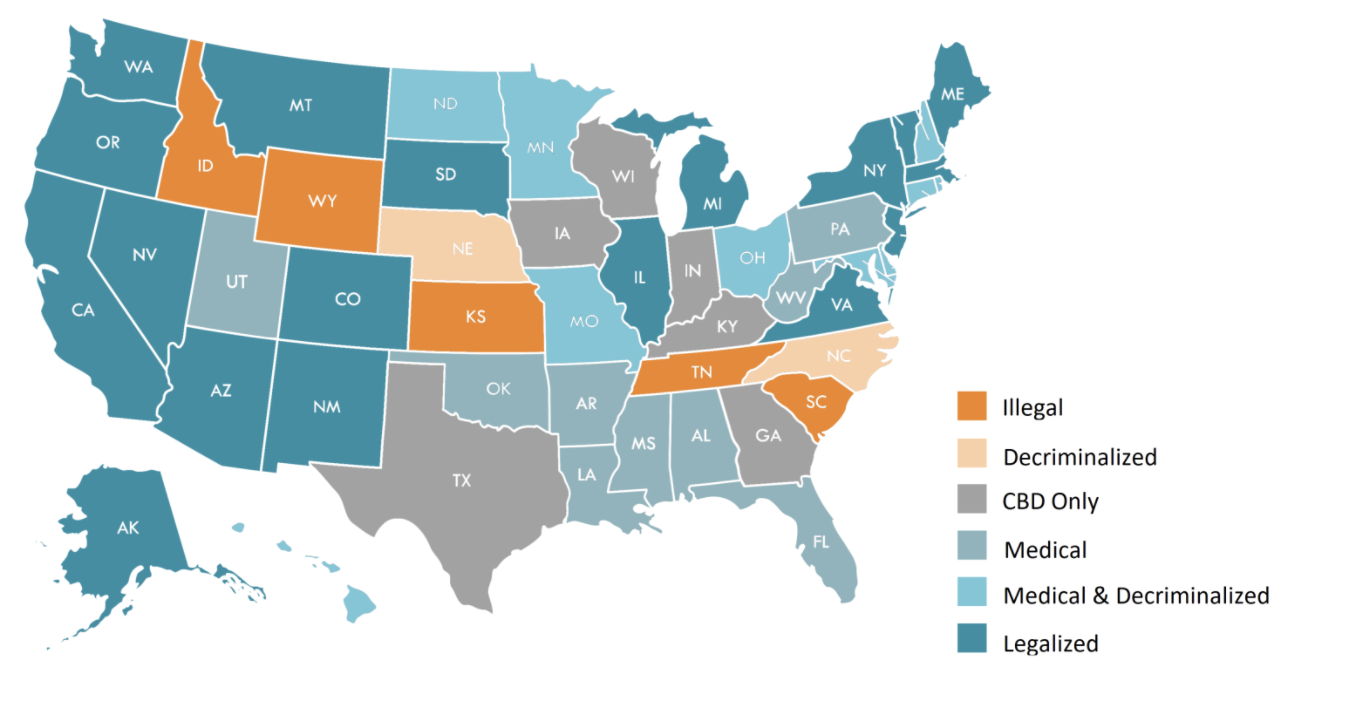 The one constant is that every state is different, with different rules and how the rules apply, creating a moving target that has caused many cannabis companies to fail in planning for the associated security costs of owning a cannabis business. While most states do not require physical guards, the costs for electronic security can be surprising.

For many of us, when the term marijuana grower is mentioned, we have the stereotype of a handful of plants in someone’s basement, or Civil Air Patrol flying over fields. Today’s cannabis industry has all the uniqueness of a Fortune 500 company, the quality control of a food product manufacturer, and the responsibility of a casino. There are differences in complexity for the cultivation facility and the dispensary, such as lighting concerns, door access control, and intrusion devices. While the differences are vast, there are some commonalities between cultivation and dispensary. It is important to note that almost every state has some version of an audit process that requires tracking, from seed to sale. Because of this, many security applications are enhanced.

Security at a cannabis location begins with the security plan. This may include detailed drawings that must be shared with local law enforcement. The security plan will detail processes and procedures for how the systems will be used and to what function, how it will be operated, and the auditing process. This may also include the maintenance schedule required either by the owner or the state requirement. The security plan will be different for each city and state. It is imperative that all regulations are understood prior to security plan design. These regulations can and do differ at each step of the cannabis process: cultivation, manufacturing, processing, testing, transporting, and dispensing.

Video surveillance accounts for most of the security costs associated with owning a cannabis establishment. Owners need to have visualization on every aspect of the operation; from growing to packaging and shipping, to each transaction thereafter. Cameras should be placed for complete situational awareness and auditing. For example, in the dispensary, each individual type of product is required to have at least one camera focused on that product. Additionally, every person who enters the establishment should be on at least three cameras. It is common for the average dispensary to have upwards of 100 cameras or more, in some states. There are additional considerations that should be accounted for as well.

Growers use sophisticated greenhouses, many of which include automated light deprivation systems, allowing them to harvest several times a year. Since cameras need light to capture images, enhanced image sensors with extreme low light capabilities or IR (Ionizing Radiation) illumination are required.

Cameras selected for use in the cannabis industry must be at least 2 megapixels (MP) (1080 pixels) or higher. Each state will have expected frame rates, but due to the nature of the industry, 15 frames per second (FPS) is expected. With cameras of 2 MP or higher, with 15 FPS, and longer than usual retention times, storage requirements are significantly larger than a traditional security installation. Additionally, light detection and ranging (LiDAR) cameras are in high demand to replace traditional motion detection applications where high false alarms occur.

Every state is different on data retention and what that purpose will be. A base of cameras has at least 30-day retention, but it can also be upwards of 2 years. This has been mandated by each individual state. Since this is a moving target, a video management system (VMS) with scalability is required. This is especially true if the owner is planning to expand to additional locations.

Minimum Battery Backup for all Systems

Most security integrators include battery backup on major systems for installation. This battery backup is typically enough to ride small power brownouts or small power losses of less than five minutes, so equipment can begin smart shutdown procedures. With the cannabis industry, according to Haley Glover with Sapphire Risk, “{sites must have a} minimum battery back-up for all systems of 15 minutes, some states can require more (i.e., 60-90 minutes and even 24 hours)”, which can significantly change the cost of an installation.

Along with each individual state requirement, many cannabis owners are finding tertiary costs associated with physical security. Some states, like California, establish a limited security framework and then allow local jurisdictions to draft localized amendments. Many of these have requirements that cannabis owners provide “x” number of cameras to the local police department at <8 FPS through an enforced public private partnership (P3). Sending HD videos over the internet can require additional costs for commercial leased line networks as well as technology applications to provide the video to the police department.

Access control is a key auditing tool and is required by most state security framework standards in the licensing procedure. There are some differences as to how access control is implemented, depending on the type of dispensary the location will be and whether it is a medical versus a legalized facility. This is an opportunity for security integrators to join owners and specify a system that meets licensing requirements.

In Criminology, the Routine Activity Theory states that a crime occurs when three elements are present, 1) a motivated offender, 2) a suitable target, and 3) the absence of capable guardians. Intrusion systems are the capable guardians for cannabis. To this end, intrusion systems should be installed with targeted coverage without sensor saturation. It is imperative to know how specific functions at each location may affect security, for example, motion detectors in grow rooms will create false alarms. The system should be fully integrated with access control and VMS systems, if not additional systems.

Securing the cannabis industry can be lucrative for the right integrator or consultant. With each state on a trend to adopt some form of cannabis legality, the opportunity is plentiful. Failure to secure risks could result in the loss of tens to hundreds of thousands of dollars in product and revenue. Just as the opportunity is plentiful, so must the knowledge of each individual state and local laws. This knowledge and understanding of the nuances of the cannabis industry will guide the type of systems to be installed, enterprise level systems that can scale exponentially, with required maintenance agreements and audited maintenance schedules.

How To Start Your Career In Wastewater Treatment O[…]

A wastewater treatment plant (WWTP) is a vital part of a communities’ ability to protect public and environmental health. A WWTP[…]