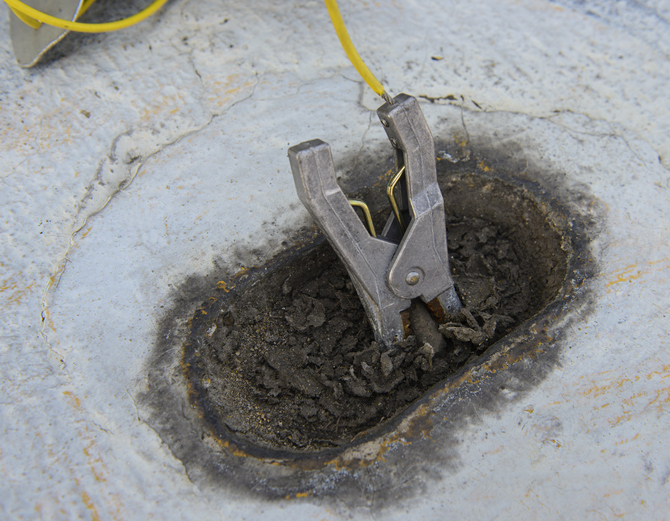 Question: Why are you permitted to go no larger than #6 cu for the GEC attached to a driven rod or driven pipe that is being used as a grounding electrode, but you have to use Table 250.66, and all of the proposed size increases in it when using a metal water piping system in the earth, as my grounding electrode conductor? Both electrodes are in the ground.

I am happy that you have asked this question because this particular NEC code “oddity” doesn’t seem to make any sense at all, and the NEC text does nothing to help us as to why.

Here is the “why”, as simply as I can explain it, with the time permitted. Be aware, I have simplified some of the science here, such as voltage potential and the movement of electrons, and the “perceived” movement of voltage.

Imagine a simple circuit, consisting of: one ungrounded (hot) conductor and one white grounded conductor- both are landed in their respective locations within the electrical panel. The load in this simple circuit will be a toaster, just like we find on a kitchen countertop. Turn this toaster to the “on” position and the voltage (which is riding on current, and is measured in amps) is allowed to move past the toaster’s switch, and up to the toaster’s heat element, where the 120 volts is then consumed. The empty current flowing out of the exit side of the heat element (by empty I mean it has no voltage riding on it, because the toaster element just consumed it) exits the element and travels back down the cord and the white grounded branch circuit conductor, and finally back to the grounded portion of the electrical panel.

In this scenario (and in this circuit) the toaster’s heat element is the resistance to that current flow. The element is manufactured to slow down the current flow by resisting the movement of electrons, and that is what makes the element get hot, on purpose.

The resistance rating of that heat element, and the limited current flow that is expected in that circuit, because of that resistance, is what determines the conductor size of the appliance’s cord, as well as the allowed branch circuit that feeds the receptacle for the toaster.

Now, imagine if we were to remove that high-resistance heat element and replace it with a raw piece of copper with no resistance? If we did that and turned the toaster’s switch to “on,” the current (unhindered by any resistance) would climb extremely high! (NOTE: in this example, our circuit-breaker shall not trip.) And if you wanted to keep this circuit energized under this condition (basically a dead short to ground) without burning it up, the branch circuit conductors feeding the toaster would have to be enormous in size, to carry all of those amps! Well, that is the theory that is at work here with the driven grounding electrode, versus a metal water-pipe in the ground used as a grounding electrode.

If electrical current (in the form of a fault, or lightning, or any other kind) were to be applied to the metal grounded parts of an electrical system, such as the panel’s enclosure, and then flow through the GEC and then on to the water-pipe in the ground that was serving as the system’s grounding electrode, that fault current would just keep flowing (and very fast I might add, and with little resistance, since that metal water-piping is such a good conductor.) And that unhindered current flow is the reason why the GEC must be larger when using the water-piping system as the grounding electrode; the water-piping is going to serve as a conductor (a good conductor) for a while. BUT….if that same amount of fault current were to flow through the metal panel enclosure and down the GEC to an 8′ driven grounding electrode (ground rod or pipe), it would then hit dirt after traveling down 8′ of rod and would then be slowed waaaay down by the resistance of that earth/dirt. The earth is a conductor, but not a great one, unlike a metal water pipe.  The current flow would be very slow once it started using the dirt as a conductor (and that slow movement here means low temperature in that GEC). That low heat means no need for an especially large GEC.

Only a limited sized GEC is required for a driven grounding electrode, because no matter how big the electrical fault, if the grounding electrode is a rod or pipe, the resistance of the earth is going to cause that fault to move slowly, and this keeps the temperature down, so a bigger conductor is not required.

This article takes a broad look at the many different processes that go into wastewater management, including the primary, seconda[…]