How To Apply Ohm’s Law 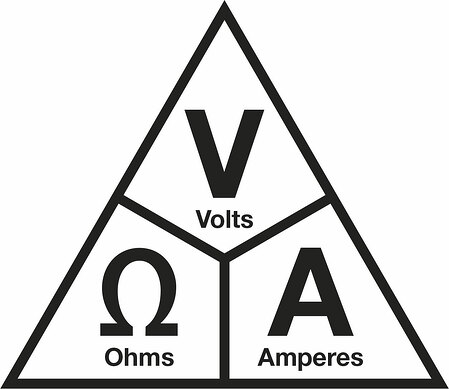 Electricity operates within predictable boundaries. We have come to identify these boundaries as Ohm’s Law. Ohm’s Law was developed as a means of explaining how electricity operates within a closed circuit. The Ohm’s Law formula helps to communicate the relationship between different properties within an electrical circuit. We can use Ohm’s Law to explain what has occurred, as well as what will occur, when certain conditions are imposed upon an electrical circuit.

The basic properties of the electrical circuit are: Voltage, Current, and Resistance. These are specific, defined, and do not change – assuming all properties remain constant. However, change the value of just one of these properties, and all properties will adjust value accordingly.

While Ohm’s Law is but an introductory rung on the ladder of electrical science, a basic understanding of an electrical circuit is necessary in understanding how Ohm’s Law, as a formula, is applied to a simple circuit.  A simple circuit consists of a power source, a load, conductors, an overcurrent device and a control device. Current will flow in this simple circuit if there is enough voltage present to overcome any circuit resistance.
Voltage is considered pressure within an electrical circuit; it is appropriately called, Electromotive Force. This pressure or “force” is caused by dissimilar electrical poles wanting to balance themselves. The push and pull imposed upon electrons in a conductor connected to these dissimilar poles, will force the electrons to move if there is a complete path for them to travel on. The only thing that can stop the electrons from moving is resistance applied beyond that of the voltage pressing them to move, or a break in the circuit that disrupts the flow of those electrons. It takes one volt (V) of this Electromotive Force to push one amp (A) of current through one ohm (Ω) of resistance- this is Ohm’s Law. Voltage(E or V) is equal to Current (I) multiplied by Resistance (R). Or in other words, E(or V)=IR.

It is not an uncommon practice to use the Ohm’s Law Triangle as a visual aid when remembering the three equations of Ohm’s Law. 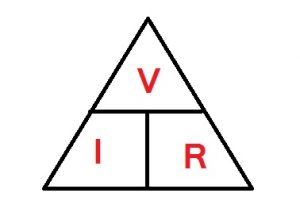 For example: If you know a 120 Volt(E or V) lamp measures .625 amps(I) of current flow when in use, how many Ohms of resistance is being offered by the lamp?

What if you know the measurable amps(I) of current flow and the resistance(R) of the lamp filament? Can you then calculate the voltage being applied to this lamp? Look at the Ohm’s Law Triangle below to determine your answer.

The Current(I) multiplied by the Resistance(R) equals the Voltage being applied to the lamp.

Conclusion
Ohm’s Law and many other electrical formulas provide us the means by which we can understand the most basic of principles of electricity and current flow. These many formulas allow us the opportunity to see into the past as well as into future electrical applications. One might say these formulas give us a leash of sorts, if not to control this phenomenon, then perhaps to at least hang on!

What if a refrigeration system could exist without a mechanical compressor, oil, or the typical blended refrigerant? A totally new[…]

Investing in Security for 2021 and Beyond

The COVID-19 Pandemic is fully matured, even spawning new mutations of the virus.  But the light at the end of the tunnel may b[…]