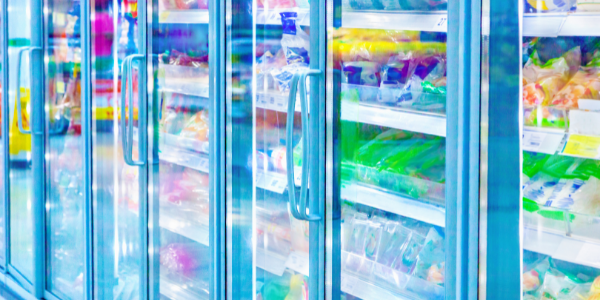 According to the EPA, the average large supermarket contains 4,000 pounds of refrigerant in systems installed as part of their sales and storage process. An average leak rate of 25% is not uncommon in these systems. This equates to about 1,000 pounds of lost refrigerant per year at a cost of roughly twenty dollars per pound. If a grocery chain has twenty stores, the ten-year cost for leaking refrigerant is approximately $4,000,000.00 ($400,000.00 per year). This estimate does not include the repair charges associated with replacing the refrigerant.

As a result of these findings, new regulations have been implemented by the EPA to reduce the leak average. Now, let’s look at some installation techniques used to lower this leak percentage.

First, all field–installed copper fittings should be brazed unless a mechanical or flare fitting is required to connect piping to components. Brazing uses filler material (alloys) having a melting point above 1,000 degrees Fahrenheit but lower than that of the base metal being joined. Brazing stands up to vibrations and pipe movement for large runs of piping better than lower temperature solders, which should be avoided.

Once all piping is connected and brazed, pressure testing procedures must be applied. To minimize the costs and hazards associated with leaking refrigerants, the following EPA best practice guidelines have been implemented through the new GreenChill program. GreenChill is a voluntary EPA partnership program that works with the food retail industry to reduce refrigerant emissions.

Visually inspect all piping for proper assembly and installation first. Make sure all bracing is in place and there is no piping that will rub together. Vibration will cause metal–on–metal rubs to eventually leak.

Isolate all components that are not suitable for a high-pressure test. Some compressors, relief valves, and pressure transducers might not handle the high pressure that will be applied to the piping system. Open ball valves and de–energize solenoid valves to prevent excessive pressure against these devices.

Charge the piping with an inert gas, such as nitrogen, up to 300 psig minimum. A tracer gas for leak detection can be included with the nitrogen, but the types of refrigerant allowed is restricted. Any refrigerant containing chlorine should not be used as a tracer gas. Leaks can be detected by a soap solution, electronic detectors, or other approved means.

If a leak is found, it should be isolated, repaired, and the piping retested. After all joints are checked for leaks, the piping should remain under 300 psig for 24 hours. After the 24-hour test, the piping should be depressurized and evacuated down to a 1,000-micron vacuum for 30 minutes. This process removes all gases and moisture in the refrigerant piping. Vacuum pumps used in the procedure should be rated at 8 cubic feet per minute (CFM) or larger. Several connections should be made to the vacuum pumps for complete evacuation of the piping.

Once the system is operational, test all joints and connections again with an electronic leak detector. Recheck areas with close tolerances to ensure all metal rubbing points have been eliminated.

Following these procedures will reduce the percentage of leaks associated with copper piping systems in supermarkets. The same tests should be applied to other refrigerant piping, such as in industrial settings, where welded or threaded steel piping is utilized. Smaller refrigeration and air conditioning installations, such as those found in convenience stores, residential apartments, or midrise buildings, should employ similar procedures as well.

Prior to the 2017 edition of the NEC, 120-volt receptacles equipped with USB charging outlets had not been addressed by the Nation[…]

Article 250 is arguably the most important article in NEC 70, and much of its content is devoted to the proper sizing and ins[…]

This is the third part of a series designed to help explain how to properly calculate motor circuits.[…]