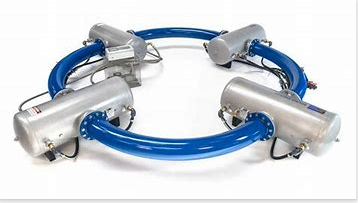 What if a refrigeration system could exist without a mechanical compressor, oil, or the typical blended refrigerant? A totally new design that required much less electricity to operate? Components of the system consist of an inert gas and large pressure vessels connected by pipes. This mechanism would be based on thermoacoustic principles that had very few moving parts. Considering the environmental issues faced today, wouldn’t it be an amazing achievement? So how does such an idea work? Unless you are familiar with thermodynamic engineering, it’s hard to explain. Let’s try to understand this as simply as possible.

Thermoacoustics is the interaction between temperature, density, and pressure variations of acoustic waves. Engineers have designed systems that put these acoustic waves to work making electrical or mechanical energy. Small scale thermoacoustic engines, driven by a loudspeaker, can create electricity. Historically, thermoacoustics has been observed for hundreds of years and studied as far back as the 19th century. Early designs were basic, however, modern thermoacoustic mechanisms are used on submarines, space shuttles, and in areas without utilities. Because this design has proven to work in extreme environments, it is an attractive model to pursue on a larger commercial scale. But what makes thermoacoustic pressure waves behave as an air conditioning system? It really boils down to one common principle: heat transfer.

All air conditioning and refrigeration designs involve the transfer of heat. This has been done for several decades using refrigerants, compressors, expansion valves, and heat exchangers. This mechanical method is based on phase conversion of a refrigerant through positive displacement.  Instead of this proven energy-consuming process, a company has developed a machine that it based on thermodynamic principles of the Stirling Cycle. The Stirling Cycle can be illustrated by trapping a gas, such as helium, in a sealed tube divided by a porous medium. The gas can be heated which creates rapid, thermoacoustic, pressure waves inside of the tube. The process of heating, compression, and expansion of the gas creates sound and work. This is an oversimplification but accurate enough for the scope of this post. 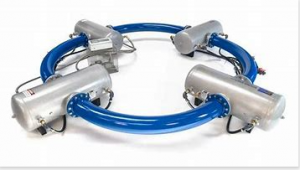 One new company has created a thermoacoustic chiller based on the Stirling Cycle engine. With this model, waste or solar heat drives argon gas, which has a zero global warming potential, through a specially designed sealed system. As the heated gas moves through a circular pipe, it creates pulses of energy. The sound that is created is only a residual effect of the pressure wave, which increases in intensity. As the pressure wave is amplified, it enters a series of pressure vessels where compression and expansion of the gas occur. Through a heat exchanger, the gas removes heat from supplied water much like a typical chiller does. The company has a prototype that can produce up to seven tons of refrigeration.

If the scale of such a machine can work, it could replace chillers in larger commercial settings such as grocery stores and commercial buildings. The energy savings could be substantial using an economical and plentiful heat source such as waste heat.

Just as the internal combustion engine will be replaced by a simpler electrical driven system, air conditioning and refrigeration systems will change too. This thermoacoustic model could possibly be the new air conditioner of the 21st century.

Top 5 Reasons to Become an Electrician

#1: Tons of Career Options. In the electrical world there are many career paths to choose from. You can work as an outside lineman[…]

Let's take a look at what is happening on the other end of that equipment grounding conductor, and what it is that enables this co[…]