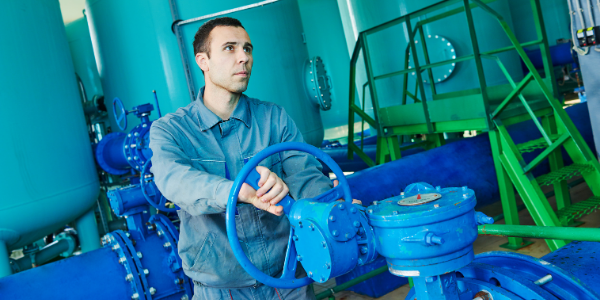 There are many causes of water infrastructure issues. These issues can be accidental damage (such as a contractor boring through a line), lack of maintenance, or natural extreme temperature swings. However, the overarching issues with water infrastructure today are aging systems and insufficient funding for replacement.

The average service life of a water main or sewer line pipe is 50 years. In general, ductile iron has the longest service life while PVC has the shortest. This means that almost half the pipes in our water and sewer infrastructure need replacing now.

An aging system is prone to problems such as increased breakage, and lead and copper leaching due to corrosion of existing pipes from hydrogen sulfide. These problems present concerns for public and environmental health. A break in the water main can lead to a decrease in water pressure of the system, contaminants entering the system, and a possible boil water notice. Water main repairs are costly and can inconvenience the public as many pipes are under roads that must be dug up to repair the line. Aging wastewater pipes present an environmental hazard by contaminating surface waters through breakages and overflows. An older system also has an increased amount of inflow and infiltration as joints and pipe material degrades.

The aging infrastructure issue is compounded by an increase in population and increased use of the system. We have infrastructure that is getting older but is being used more than ever before.

We see the need for replacing an aging infrastructure and we know the majority of current infrastructure is reaching end of service life, so why don’t we just fix it?

The major problem is insufficient funding for line repair and replacement projects. The aging infrastructure problem has been literally buried for years. The public can’t see the issue as compared to say, a pothole in the road, so garnering public support for funding can be difficult. State and federal funding can cover some of the project costs, but ultimately it comes down to a rate increase for users. Small rural communities may face the biggest challenges, with low-income populations and low tax bases creating a funding gap that citizens may not be able to fill.

This is just a snapshot of some of the problems with water infrastructure today. This is a complex problem with many stakeholders and competing initiatives. An aging infrastructure combined with a lack of funding to repair and replace that infrastructure along with increased usage without a proportionate increase in funding only compounds the issue. This problem has been out of sight and out of mind, but now is the time to bring the issue to light and educate the public and other decision makers on a problem they can’t see and won’t consider until a failure happens.

Water operators hoping to stay current on industry issues can connect with JADE Learning. If your license is up for recertification, enroll in online water continuing education today.

Why You Should Renew Your New Hampshire Electrical[…]

Let's take a look at what is happening on the other end of that equipment grounding conductor, and what it is that enables this co[…]