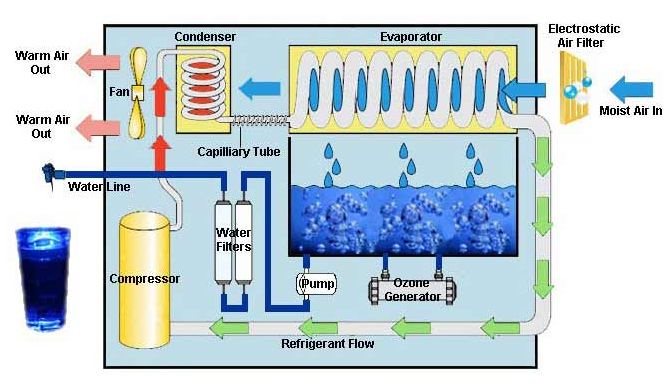 First, understand that atmospheric water generators do not “generate” anything. The water is already present in the atmosphere, and these devices extract rather than generate water. We will, however, still use the term to keep things simple and avoid conflicting labels for the device(s).

In the Bible, the book of Genesis describes conditions that, watered the earth by mist that rose from the earth. The principle of water extraction was apparently well known, even then.

Passive collection of water from the air was practiced by the Incas in the Andes Mountains above the rain line. Dew was collected each night and transferred to cisterns, a type of water tank, and stored for later use. Others used “fog fences,” or net-types devices, to collect water from the fog produced near the sea. The net was shaken to allow the water to fall into a trough for transport to storage. This method is still practiced today and is especially useful in areas next to the sea that do not have a dependable source of fresh water. These passive methods require little or no machinery, and all the driving forces of the process are powered by nature.

Solar greenhouses offer a closed hydrologic cycle that could use sea water as the water source. The condensed fresh water sustains temperate crops not readily available to some populations. The unused liquid forms a strong brine from which salt can be extracted, thus producing another useful product aside from the vegetables. This could be a new Green Revolution in the production of food for the masses, if carried into a large scale.

The most touted Atmospheric Water Generators (AWGs) use refrigeration to condense the water vapor from the air. Anyone that uses air conditioning or dehumidifiers can see the process by the collection of water in the dehumidifier tank or the drain from the air conditioner. This water, however, is considered waste to be drained or poured out. An iced drink can also demonstrate the principle by viewing the collection of water on the outside of the glass.

Refrigerated systems are the most used. They can be rather energy intensive, using a substantial amount of power for each liter of water produced. Many populations must travel for miles to get drinking water. These units are useful in remote areas to produce drinking water for people not able to access it and they are especially promising in producing a long-term supply in the aftermath of natural disasters, producing water in place rather than shipping tons to the victims.

Air introduced to the refrigerated coils is filtered to capture dry contaminants, and the condensed water is also filtered to eliminate or reduce contaminants. This may not always be the case, but the most comprehensive units use this method.

Our Defense Department has been involved in developing units for use on remote bases or battlefields to supply clean drinking water for troops or displaced civilians. If the fuel for the portable generators lasts, water can be extracted. Local power can also be used, when available. Refrigerated units are available for purchase by the public at prices that defy description in polite terms. The advertisements are dependent on perfect atmospheric conditions and should be taken with “a grain of salt.” It is still useful, however, to view these advertised items to better understand the principle.

The actual efficiency of AWGs is highly dependent on the amount of water in the air. In arid areas, the water collected will be lower for the energy spent than water extracted in areas of higher humidity. The main attraction of the AWG is the fact that water is always in the atmosphere waiting to be extracted, by natural or artificial means.

Another method uses the principle of desiccant extraction. The air is exposed to a brine in which hygroscopic action attracts the moisture to the desiccant (brine). The water is distilled and condensed from the weakened brine solution which is returned to its normal state. The brine can be recycled and used repeatedly.

This is hardly an intensive study of these promising concepts; there is more to learn about AWGs and how they will be used in the future.

In order to remain in good standing as a licensed electrician in Wyoming, you’ll need to renew your license on a regular basis. […]

Phenolic insulation is an alternative to galvanized sheet metal. Many HVAC professionals have turned to this option when installin[…]

How Do I Renew My Georgia Air Conditioned Contract[…]